Through a partnership with the African American Heritage Society of Rutherford County and Oaklands Mansion, a monument and marking ceremony is planned for section “M” of Evergreen Cemetery. Originally called Oaklands Cemetery, oral tradition indicates that this is the burial ground of the enslaved workers of the former plantation.

The memorial, to be constructed by David Harper in the fall of 2021, will read: “Gone but not forgotten. In memory of the African Americans buried here in section “M” of Evergreen Cemetery in unmarked graves including the enslaved of the Maney plantation for whom this burial ground was likely first established. Erected by the African American Heritage Society of Rutherford County and Oaklands Mansion in 2021.” 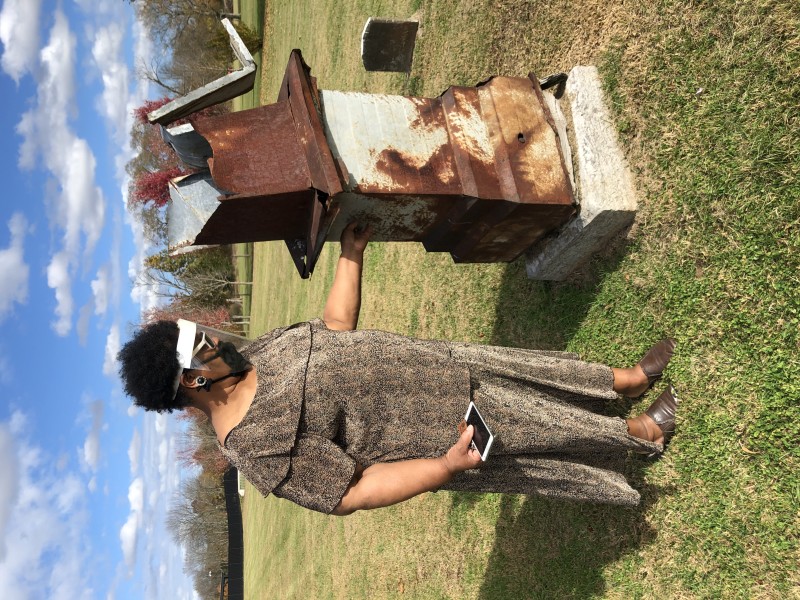 Mary Watkins, President of the African American Heritage Society of Rutherford County stands near the center of section M in Evergreen Cemetery.

To learn more about, or to join, the African American Heritage Society of Rutherford County visit their Facebook page: https://www.facebook.com/aahsrctn/

From 1814 until 1872, this land was part of an extensive holding owned by the Maney family. With looming financial hardship following the Civil War, Dr. James Maney sold this land to the City of Murfreesboro in 1872 to become a new cemetery. In section M of the cemetery, are the unmarked remains of enslaved individuals who lived and labored at Oaklands until 1872. 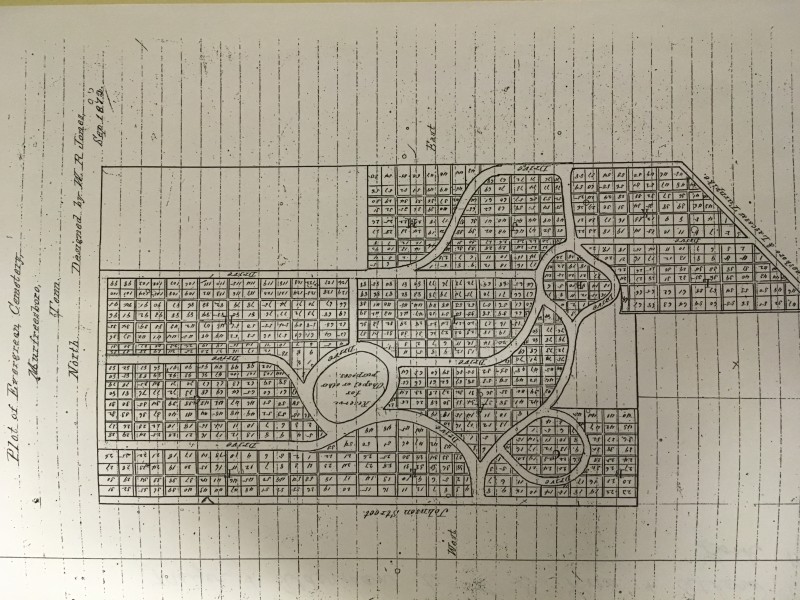 Evergreen was designed as a rural park cemetery with winding roadways, Shaded lawns, flower and trees, and attractive decorative ornaments. Today, Evergreen covers over 100 acres of land and contains more than 200,000 graves.

Some of the graves pre-date 1872, indicating that the remains were reinterred here after Evergreen opened.  There are a large number of death dates between the years of 1935 and 1937 when an influenza epidemic swept through the Murfreesboro community, killing many of its citizens.

Evergreen evolved from the slave burial grounds of the Maneys’ nearly 1,500 acre plantation.  In section M there is a large open field.  Within this area lie the unmarked and mostly unknown graves of the enslaved Africans who toiled on the grounds of Oaklands and finally came to rest here.  The significantly aged tin obelisk that you see in this area is too weathered to read.

On October 18, 2021 members of the African American Heritage Society of Rutherford County, Rutherford County Archeological Society, Oaklands Mansion and other community members witnessed the radar scanning of Evergreen Cemetery Section M performed by Middle Tennessee State University Geoscience Department students under the direction of Dr. Joe Collins. The results will indicate the location of unmarked graves including individuals believed to have been enslaved by the Maney family of the Oaklands Planation.

WATCH: What lies beneath? Group searching for graves of enslaved from Oaklands Plantation Radar from MTSU is used to create a map of Evergreen Cemetery, Section M, where enslaved are likely buried in unmarked graves. 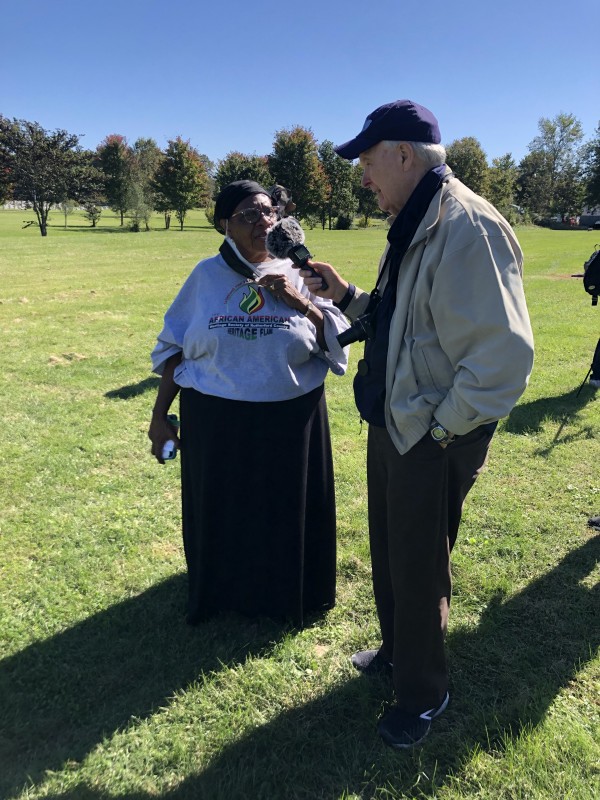 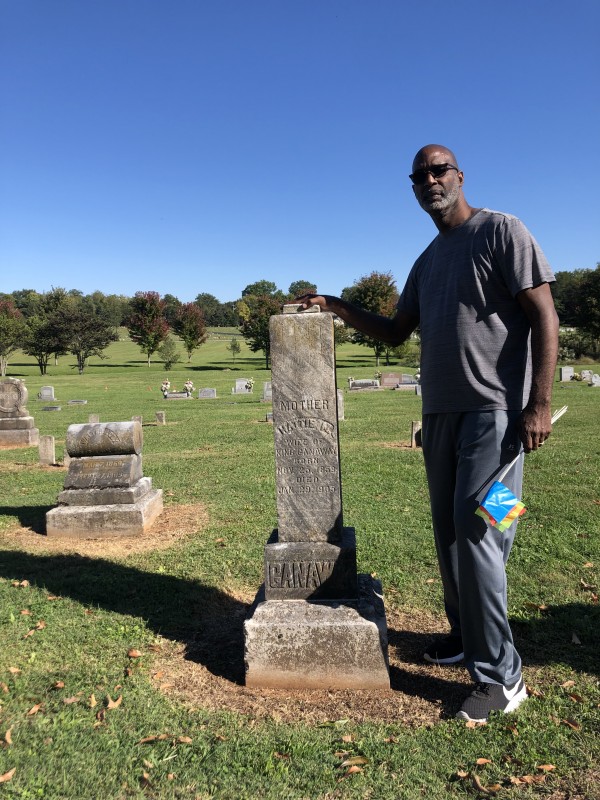 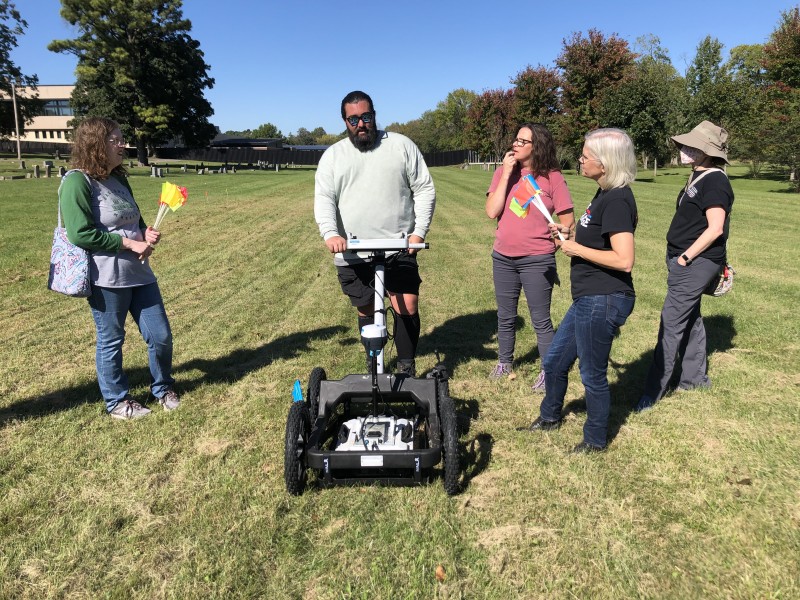 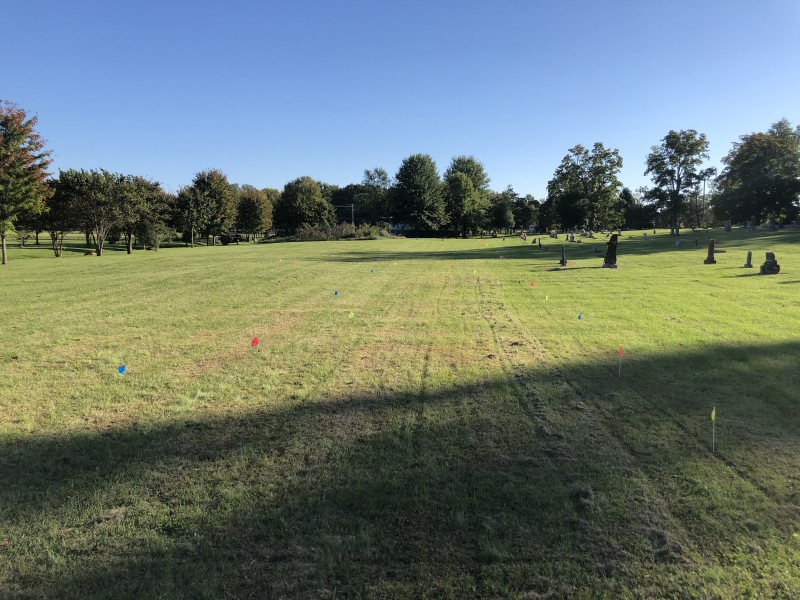 Evergreen Cemetery Section M after radar scanning on October 18, 2021. Flags indicate unmarked graves. The cemetery shop building is barely visible in the background. A metal obelisk, said to have been erected as a memorial to an enslaved person, stands to the right.

‘Oaklands Mansion and MTSU search for evidence of the enslaved in Murfreesboro’
by Nancy DeGennaro, Murfreesboro Daily News Journal 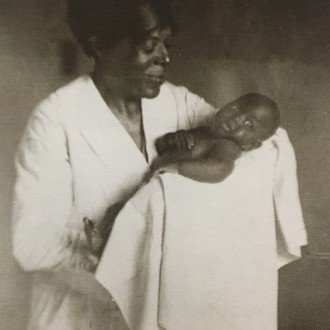 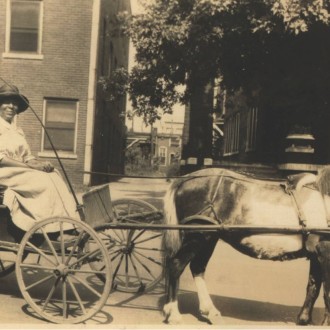 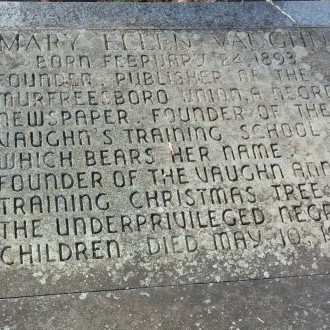 Closer to the street, in a grave which is not unmarked, is buried Mary Ellen Vaughan, a Tuskegee Institute graduate.  Ms. Vaughan was one of the first African-American public health nurses; founder of the Murfreesboro Monitor, the first newspaper for African-Americans in this area, founder of Vaughan’s Training School on South Highland and is buried along with her uncle.

Mary Ellen Vaughn was an entrepreneur and skilled nurse who used her talents to promote the interests of Murfreesboro’s African American community in the first half of the 20th century.

Vaughn’s extensive education included Tuskegee Institute, Chicago Business College and Tennessee A&I State College. She established the African American newspaper Murfreesboro Union in 1920 and Vaughn’s Training School in 1933. During the 1920s, she worked as a nurse in the Commonwealth Fund’s nationally significant effort to improve rural public health in Rutherford County. Her school provided home health-care instruction and adult education, and served as a clearinghouse for civil rights information and activism. Murfreesboro’s Vaughn Street continues to honor her memory.”

VAUGHN’S TRAINING SCHOOL BLACK 1933-1951 was located in the home of Mary Ellen Vaughn on the east side of South Highland Street in Murfreesboro. The site is now the intersection of Vaughn Street and South Highland Ave.

Mary Ellen Vaughn, a graduate of Tuskegee College in Alabama and the holder of a bachelor’s degree 1931 and a master’s degree 1950 from Tennessee A&I College in Nashville, was the founder and teacher. Mrs. Sadie Jones taught singing and piano; Mrs. Martha Kimbro, sewing.

The school provided basic and vocational education for Black adults in the community. Besides basic subjects, vocational courses such as typing, cosmetology, and sewing were offered. Billy Haynes, a former grocer, was a student. He recalls that Miss Vaughn taught “the ABC’s first, then printing, writing, and reading. Other subjects included arithmetic, history, and geography. School cost 25 cents each week.”

Stephen Driver in a 1971 MTSU master’s thesis wrote, “This school was established because of the requirements of literacy to vote.” The purpose of the school in Mary Ellen Vaughn’s own words was “to elevate the race to high ideals, to lift them up and encourage them to live better lives.”

The school closed in 1951 because of Mary Ellen Vaughn’s ill health.

Mary Ellen Vaughn was born in Montgomery, Alabama, in 1893. She was a teacher at Tallassee, Alabama, in 1900, and in Macon County, Alabama, in 1901-1902. In 1920, she moved to Murfreesboro to care for her Uncle William Bibb and to do private teaching. She also worked as a public health nurse, having taken post-graduate work in nursing at Tuskegee Institute, and was a maid and possibly a nurse for the Faircloth family. She also published monthly The Murfreesboro Union, a four-page newspaper which “contained a minimal amount of advertising and generally dealt with social events in the Black community.” She died in 1953 “one year before the Brown school decision that altered forever the role of the Black in American society. But for more than 30 years she had worked to improve the lot of the Black person in Murfreesboro through education and personal attention.”